It has been reported that Manchester United have rejected an approach from Tottenham for Javier Hernandez. 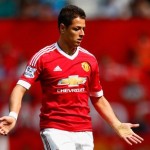 The Daily Star Sunday claims that Spurs saw the striker – known as Little Pea – as an alternative to West Brom’s Saido Berahino.

But their inquiry for the Mexican was firmly knocked back, with United insisting they cannot sell another striker unless they sign one first.

Hernandez, 27, is back in favour at Old Trafford after spending last season on loan at Real Madrid.