It has been reported that Manchester United have reserved the No7 shirt for Arturo Vidal. 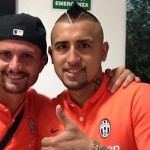 The No7 has most recently had been worn by Antonio Valencia.

However, he gave up the most prestigious shirt in United’s history last year after a difficult year wearing it.

United would have to break their £37.1m transfer record – set by David Moyes when he bought Juan Mata in January – to get him.