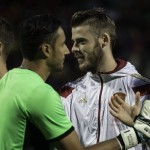 The Spanish international goalkeeper is expected to join Real Madrid this summer.

The Daily Mail claims that Van Gaal is considering whether to bring in back-up to Victor Valdes or a goalkeeper who will challenge for the gloves in the increasingly likely event that De Gea departs.

The talented 24-year-old is yet to inform United of his intentions but the feeling inside Old Trafford is that he will head back to Spain and they want to be prepared should that be the case.

United have been linked with a move for Spurs goalkeeper Hugo Lloris but they will be wary of dealing with the White Hart Lane club’s shrewd and savvy chairman Daniel Levy.

Chelsea’s Peter Cech is also admired at Old Trafford although the Arsenal target has hinted that he would prefer to remain in London and Jose Mourinho has not given up hope of keeping him at Stamford Bridge.