It has been reported that Manchester United are dragging their feet over new contract talks with young midfielder Andreas Pereira. 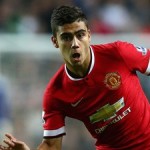 The Mail on Sunday says Pereira, who was named on the bench by Louis van Gaal against QPR last weekend, is able to talk to other clubs from January 1 as the clock runs down on his deal which expires next summer.

Still only 18, he is one of the development players promoted by Louis van Gaal to be part of the first-team squad this season in the belief he has the ability to make it at Old Trafford. He was picked by Brazil for an Under-20s tournament in China last summer — a rare accolade for a European-based player.

Van Gaal said last night: “The class of ’92 were guardians of the culture of the club. It is very important that a club like Manchester United have guardians and therefore you need a very good youth education.

“It is very important and I did it with Barcelona. I gave debuts to Xavi, Andres Iniesta, Carles Puyol and Victor Valdes. ‘I want to do that but the youth player has to take their chance.”