It has been revealed that Manchester United have joined the interest for Lokomotiv Moscow striker Oumar Niasse. 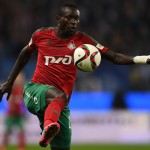 However, the Blues won’t get a clear run at Niasse, with Tottenham and Manchester United also keen.

Lokomotiv have already rejected attempts from Bayer Leverkusen and AS Monaco in recent days.

Niasse has scored 12 goals in 21 games this season and is rated at €25 million by Loko.