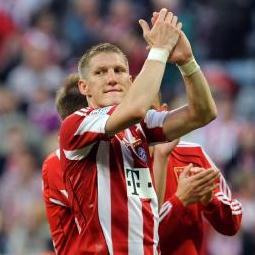 Sensational news are out and it has been revealed that Manchester United are ready to swoop for Bayern Munich star Bastian Schweinsteiger.

The German international midfielder however has been a long-term favourite of Inter Milan president Massimo Moratti, who would love to bring the 26 year-old to Italy.

Now it’s emerged that United boss Sir Alex Ferguson is considering a £30 million bid for Schweinsteiger as he seeks a replacement for the retired Paul Scholes.

Moratti won’t allow Schweini to move to Old Trafford without a fight – should Bayern indicate a willingness to sell.

Real Madrid president Florentino Perez is also a big fan of the midfielder, though may have already played his hand with the arrivals of Turkish pair Hamit Altintop and Nuri Sahin this summer.