Interesting transfer news are out claiming that Manchester United are joining the battle for Anzhi Makhachkala midfielder Willian. 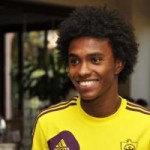 The Daily Mail claims that David Moyes has entered the race to bring £30million Brazilian attacking midfielder to the Barclays Premier League.

The former Shakhtar Donetsk star has already attracted the interest of Liverpool and Tottenham, but Manchester United could hijack those deals.

Liverpool are in advanced discussions with Anzhi regarding a move for the 25-year-old and remain confident of landing him.

But United have now made their own enquiry and Old Trafford is believed to be Willian’s preferred destination. Luis Suarez To Win The PFA Player Of the Year Award