It has been reported that Manchester United defender Jonny Evans has been hit with a six-match ban for his role in the spitting disgrace with Newcastle United striker Papiss Cisse. 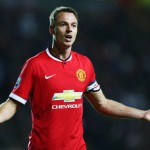 Cisse, who accepted his wrongdoing, has received a seven match suspension.

But Evans, who rejected the charge, will be reeling after being found guilty by the FA panel.

Football’s governing body wanted the matter dealt with before United’s FA Cup quarter-final with Arsenal on Monday at Old Trafford, where Evans will no longer be able to play.

“Both players were charged in relation to an alleged breach of FA Rule E1[a] that in or around the 38th minute of the fixture they spat at each other.

‘”Mr Cisse accepted the charge and his suspension consists of six matches, which is the standard penalty for this offence, with an additional one match as he has previously accepted a violent conduct charge this season.

“Mr Evans denied the charge but it was found proven following an Independent Regulatory Commission hearing on Friday [6 March 2015], resulting in a six-match suspension.”