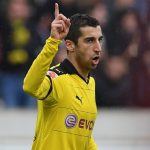 It has been revealed that Manchester United are TODAY moving to trump Arsenal for Borussia Dortmund midfielder Henrikh Mkhitaryan.

Mkhitaryan has the same agent as Zlatan Ibrahimovic – that could lead to him following the Swedish superstar, who has been heavily linked with a move to Old Trafford. Barcelona and Bayern to bid for Laurent Koscielny