It has been reported that Manchester United sent Twitter into meltdown over a tweet claiming Daley Blind would be out for SIX months. 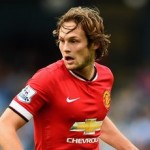 But they missed out the word ‘not’ so it looked liked the United boss had said the Dutch international would be facing a six-month lay-off with the knee ligament injury suffered in Sunday’s 6-0 win over Latvia.

That sent fans into a panic on social media, prompting Blind to respond to an avalanche of queries by: “Wow, all of a sudden a lot of messages!

United later amended their website to make it clear what Van Gaal said.