It has been reported that Manchester United are eyeing Real Madrid defender Pepe. 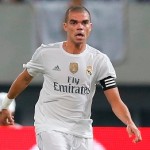 The 32 year-old Champions League winner could be available for chump change, with his Real deal having less than 12 months to run.

Pepe is concerned over Real’s reluctance to discuss new terms and Ramos’ U-turn also has him fearing for his first team place under new coach Rafa Benitez.

Van Gaal has been shopping all summer for an experienced centre-half, but has seen approaches for Ramos and Borussia Dortmund skipper Mats Hummels come to nothing,