Interesting transfer news are out claiming that Manchester United is planning a shock a bid for Southampton youngster Luke Shaw if Everton continue to resist their push for Leighton Baines. 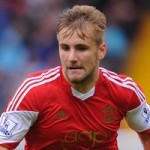 The Daily Express says the highly-rated Shaw, 18, is regarded as one of England’s best prospects, and United manager David Moyes has checked on him after facing up to the prospect of missing out on Baines.

Shaw signed a five-season contract at Southampton in the summer and starred in the opening-weekend victory over West Brom to underline his importance to the Saints, who do not need to sell.