Reports are out claiming that former Manchester United coach Rene Meulensteen feels it was a mistake to allow Giuseppe Rossi to leave. 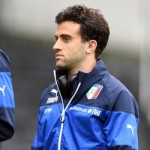 The 27 year old Italian international, though injury plagued, is now regarded as a star with Fiorentina.

“Sometimes big clubs must make painful choices and Manchester United has not freed him lightly. Personally, I would never have done that because you could see that he would become a major player in the Premier League.

“He would have been what we see from David Silva, Nasri, Mata. All players who play in the middle of the lines and Rossi would be perfect in that position.”