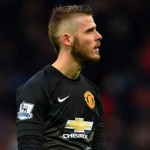 Reports are out claiming that Manchester United have slapped a £45 million price-tag on goalkeeper David de Gea.

The Spanish international goalkeeper continues to be linked with Real Madrid as his new deal remains unsigned.

The Sunday Express says United have made it clear any further discussions between the two clubs will also involve their pursuit of Madrid’s world-record £86m signing Gareth Bale – one which is looking increasingly likely to happen in the summer.

De Gea, United’s player of the season, is torn between a return to Spain and accepting a hugely-improved £200,000-a-week contract to stay at Old Trafford.

Rooney : I Want To Win The World Cup!