Reports are out claiming that Manchester United are seeking £7 million for Wilfried Zaha. 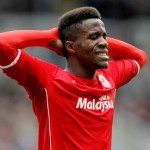 The People revealed that Newcastle boss Alan Pardew is eyeing a move for Zaha – after Manchester United agreed to sell the winger for £7million.

New Old Trafford chief Louis van Gaal has decided to offload the England star, who fancies a switch to the north-east.

Pardew now needs to persuade Toon owner Mike Ashley, who is insisting on the final say on all transfers, to come up with the cash.

Newcastle missed the chance to sign Zaha for £100,000 three years ago.