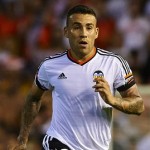 Reports are out claiming that Manchester United are intensifying their pursuit of Valencia defender Nicolas Otamendi.

The Mail on Sunday reported that Valencia are asking £36million for the Argentine.

And though United are still committed to a move for their No 1 defensive target Mats Hummels, Borussia Dortmund are increasingly confident that their captain will stay, with sporting director Michael Zorc having said as much last week.

Otamendi, though, is a key target for United and they tried to sign him in January. He is represented by Jorge Mendes, the Portuguese agent who has had a long-standing relationship with United