It has been reported that Manchester United striker Danny Welbeck is pushing for a move to Tottenham. 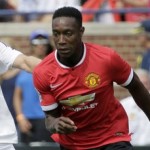 The Sunday Mirror revealed that Welbeck wants a move to Tottenham – and the north London club are keen to take the Manchester United and England forward either on a permanent £15million move or on loan.

United are closing in on the signing of Angel Di Maria , which would further limit Welbeck’s chances of first-team football at Old Trafford.

And the 23-year-old player has told pals that he is keen to join Spurs this week.