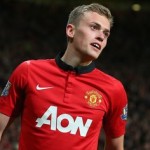 It has been reported that Manchester United striker James Wilson admits some regret having never played with Cristiano Ronaldo.

He told MUTV: “Obviously he’s a winger but Ronaldo is my next one because he scored so many goals for United when I was growing up. I was getting closer and closer to playing in the same team as him but I wasn’t quite quick enough to get there!” Man Utd Sweating Over The Fitness Of Anthony Martial