It has been reported that Manchester United striker Javier Hernandez hopes to sign permanently with Real Madrid. 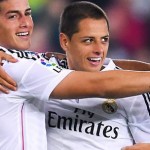 The Mexican international fell out of favour at Manchester United last season, only starting six Premier League matches, and believes his Old Trafford career is over.

“They thought I couldn’t help any more at United so we decided by mutual agreement that I would leave,” Hernandez told ESPN Deportes.

“It was difficult, although I had offers from other teams, but when I got the opportunity to come to Real Madrid I didn’t hesitate.”

He added: “I dreamed of being here. I have the talent and I’ll work hard to show I belong at such a great institution. I hope some positive things happen, both to the club and myself.”