It has been reported that Manchester United striker Robin van Persie is being accused of a Dutch ding-dong with Schalke ace Klaas-Jan Huntelaar. 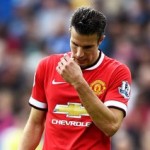 Ruud Gullit fears the bust-up could cost Huntelaar a place in the Holland squad.

The Chelsea legend saw Van Persie and Huntelaar screaming at each other during the 3-1 qualifying win over Kazakhstan, Holland’s sole win so far between defeats by Czech Republic and Iceland.

He said: “Louis van Gaal got everyone quiet again and made the team work for Van Persie. All he wanted was other players to serve the right balls to Van Persie.

“With the help of Arjen Robben, who was brilliant, Holland got to third in the World Cup. But the problems have far from disappeared. Against Kazakhstan, Huntelaar was mouthing off again and the old confrontation with Van Persie came back to the surface.” Man Utd To Rival Arsenal For Italian U21 International Defender