Wayne Rooney has dismissed his critics after scoring in England’s 2-2 draw with Ecuador yesterday. 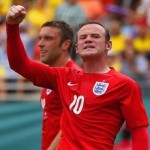 There have been calls for the Manchester United striker to be dropped for England’s World Cup opener against Italy.

“I am not really interested,” Rooney said when asked about claims he should be dropped.

“A lot of people have their opinions – but I listen to the people around me and in the coaching set-up.

“It is a good squad the manager is picking his team from so the manager will have some tough decisions I am sure and that is down to him to do.”