It has been reported that Manchester United striker Wayne Rooney hopes to start today at Everton. 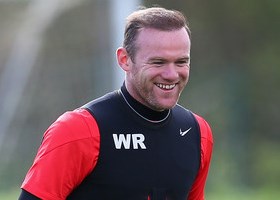 Rooney, who has trained all week after a recent toe problem, says everyone is raring to go against his former club and, even though there is no championship crown to fight for this year, the England international insists the players are determined to ensure the season ends in positive fashion.

The 28 year old told MUTV : “When you go out of a competition, you really want to play as quickly as possible so to have had a break with no game has been tough,”.

“We’ve got some good training sessions in though and have been able to prepare well for the game on Sunday.

“It’s disappointing and frustrating [not to be fighting for a trophy] but we have to just keep going and try to win games and end the season well. It’s not nice but that’s football – sometimes you win, sometimes you don’t. We have to get over that quickly and try to do well in these last five games and pick up maximum points. They’re big games – even though there isn’t a trophy on the line, we still want to end the season well.”