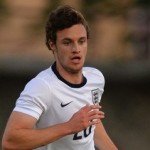 Reports are out claiming that Manchester United striker Will Keane is a loan target for Championship clubs.

The Daily Mail says Keane is the centre of a tug-of-war between Championship duo Reading and Blackpool.

The 22-year-old has made just one first-team appearance for the Red Devils, appearing as a substitute in the 3-2 defeat to Blackburn back in 2011.

Keane spent time out on loan at Wigan and QPR last season, but failed to find the net in 14 games.