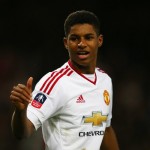 Black reckons Rashford is like a young Welbeck and believes he will go onto forge a fine career for himself.

“The thing that sticks in my mind was when I was at Sunderland we had Danny Welbeck on loan,” he said.

“We put him on for the first game, took him off after 60 minutes, he looked a little lost.

“But within a week or so I saw him grow into a man. He had everything, touch, pace, power, work rate. He is very similar to Rashford.

“We went to Chelsea and beat them 3-0 and Danny Welbeck was the best player on the pitch. He will go on to be an exceptional footballer. Outstanding mentality.

“I don’t know Rashford’s mentality. But he has handled it all well so far.”