It has been revealed that Manchester United are left fretting over the fitness of star striker Anthony Martial following his injury while on international duty. 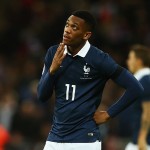 Martial was forced off with an ankle injury in the 67th minute of France’s 2-0 loss to England in the friendly clash at Wembley on Tuesday night.

Following the game, manager Didier Deschamps stated that the striker was forced off due to a slight knock.

Deschamps had said: “He was in quite a bit of pain after the match. He got a kick in the penalty area. I think it’s just a knock rather than anything else to the top of his foot.”

Later on, Martial was pictured heading towards the team bus on crutches and as a result, United are left sweating over the fitness of their star summer signing.