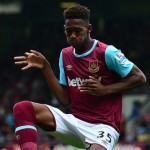 Reports are out claiming that Manchester United have made formal £10 million bid for West Ham defender Reece Oxford.

The Mirror says Jose Mourinho has kicked off his summer transfer business with an official offer for West Ham starlet Oxford.

The England U20 international is seen as one of the brightest young talents in the English game with Manchester City, Liverpool and Arsenal also known admirers.

But Mourinho, who was officially unveiled as Louis van Gaal’s successor at Old Trafford last week, has moved to steal a march on his rivals with a firm offer.

Oxford, who has two years left on his current deal, is seen as an England star of the future and can operate both in midfield and central defence.