It has been reported that Arturo Vidal is being tipped to leave Juventus in January. 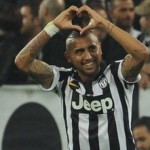 The Chile international was a long-term target during the summer for Manchester United boss Louis Van Gaal, but the Dutchman’s attempts to prise him from the Serie A proved unsuccessful.

However, speaking to Tuttomercatoweb, former Juventus star Nicola Amoruso believes that Vidal will leave the club for a fresh start in the near future.

He said: “It seems to me that there will soon be a split [between Vidal and Juventus].

“He is a player of value, but he needs to go and compete in other leagues.”

Agent : Nedved Does Not Want To Be A Coach!