It has been reported that Juventus midfielder Arturo Vidal will decide where his future lies when he returns to Italy for pre-season training. 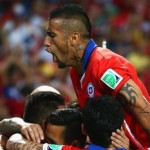 The Chilean international has been linked with a move to either Manchester United or Real Madrid.

“It’s difficult to speak of other teams when you are already at a top club,” the 27 year old is quoted as saying to Chilean newspaper La Cuarta. “I have won the Serie A title three times and I respect my team-mates.

“I have heard about the interest shown by Real Madrid and Manchester United in me but it is my agent who deals with this.”