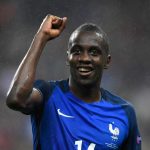 Reports have emerged claiming that Blaise Matuidi wants to move to England if he is to leave PSG after the Euros.

The midfielder was mooted to have flown to England yesterday for talks with Manchester United and Jose Mourinho.

However, L’Equipe says France team officials insist the midfielder was not granted permission to travel to Manchester – though the report also says he is a target for Mourinho.

Meanwhile, it’s claimed Matuidi wants to move to England – but only to join a major club. Chelsea, Manchester United, Manchester City, Tottenham and Arsenal have been prioritised.

Sources insist Matuidi’s camp have fielded enquiries, but no formal offers have been received from England.