It has been reported that Daniel Alves is ready to quit Barcelona in January. 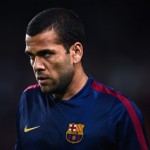 The Barca fullback’s current deal expires in June and El Mundo Deportivo says he’s been informed this week that no new contract will be tabled.

Rather than run down his current agreement, Alves is ready to leave Barca immediately, with a move abroad the priority.

Manchester United, Liverpool and Arsenal have been linked with Alves this season, though Juventus are also keen.

Alves has been with Barca since 2008.