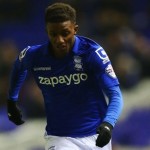 It has been reported that England U20 coach Aidy Boothroyd is urging Demarai Gray to keep his feet on the ground.

The Birmingham City winger is being linked with Manchester United this summer, along with Premier League new boys Bournemouth.

Boothroyd said: “With the amount of adulation and exposure these guys get it’s very, very easy for young players to fall off the wagon and start to believe the hype.

“That is the real key. You had to do four or five seasons as a professional before you were talked about, they way some of these players are talked about now – they’ve only played for a couple of weeks.”