It has been reported that Gerard Pique has suggested that he will remain with Barcelona for the rest of his career. 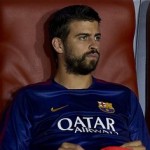 The 27-year old Spanish defender has been linked with a possible return to former club Manchester United before his playing days are over but he has indicated that he will be remaining in his home city for the foreseeable future.

“I love this club for its history, its style of play and its connection to Catalunya,” he told FourFourTwo.

“I love it here. I am at the best club in the world right now. I have no intention of leaving now or later. I’ve just signed a new contract and I want to retire a Blaugrana, just like (Carles) Puyol did.

“You never know what the future holds, but right now, I love this city, I love the people in the club, and most importantly, I love the institution. I don’t see myself leaving.”

World Cup and Euro-winner Pique joined Barcelona from United in 2008 and has since made close to 300 appearances on his way to four La Liga titles, two Champions League trophies, two FIFA Club World Cups, one UEFA Super Cup and two Copa del Reys.