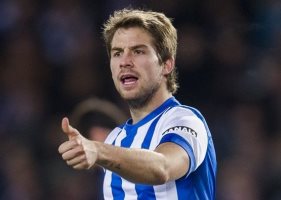 Premier League giants Manchester United and Manchester City are among those to have been linked with the 22-year-old.

“It is nothing,” he told reporters in Spain when asked about the Bilbao connection.

“I cannot see Athletic coming in and giving €30million to the enemy.

“I do not think about it at all because I would never go to the other side.

“For that reason alone everyone can stay calm.”