It has been revealed that Ivan Rakitic is ready to quit Barcelona in 2017. 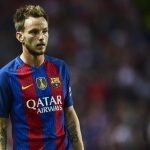 The midfielder has been linked with Manchester United and Don Balon says he won’t stick around if Luis Enrique remains as Barca coach.

Barca teammates feel Rakitic has been mistreated by Enrique and understand his present frustration.

Rakitic is in talks with Barca over a new deal, but has been warned he must be careful with his demands as there isn’t room in the budget for a big pay-rise.

Barca players rate Rakitic as a key man and his substitution against Real Madrid on Saturday is still being discussed inside the locker room.

If things do not change, the Croatian will seek to move on rather than play for Enrique.