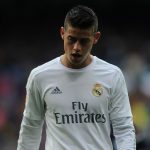 Reports are out claiming that James Rodriguez is ready to leave Real Madrid this summer.

Marca says he was left on the bench for the Champions League final win over Atletico Madrid.

After the penalty shoot-out win Rodriguez insisted he was ‘happy’ at Real but the snub was the final straw.

The Daily Star revealed earlier this month that Manchester United have been offered the Colombia international.

The offer was made to the Old Trafford club on Real’s behalf by his agent – the influential Jorge Mendes.