Reports are out claiming that Feyenoord midfielder Jordy Clasie is being linked with a move to the Premier League. 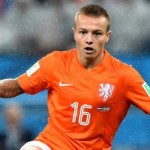 The 23 year old Dutch international has been linked with Manchester United, while former coach Ronald Koeman wants him at Southampton.

Speaking with RTV Rijnmond, Clasie’s agent insisted reports of a transfer request were false, but he could not rule out a move away.