It has been reported that Manchester United target Kevin Strootman is set for a playing comeback with AS Roma this weekend. 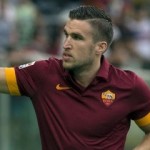 The Dutch international has been missing for eight months with a knee injury.

The Telegraph reported that United manager Louis van Gaal confirmed during the club’s summer tour of the United States – ahead of a friendly against Roma in Denver – that he would monitor Strootman’s recovery from injury before assessing a new year move for the Holland international.

Roma have arranged a B team game for the 24-year-old this Sunday.

And if Strootman emerges unscathed from the run-out with Alberto De Rossi’s reserve team, Roma coach Rudi Garcia is ready to restore him to the squad for the fixture against Atalanta on November 22 or the Champions League clash with CSKA Moscow in the Russian capital three days later.