It has been reported that the agent of Lazio midfielder Lucas Biglia won’t shut the door on a move to Inter Milan. 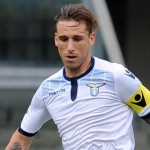 The Argentine international has been linked with the Nerazzurri.

“It’s normal that the biggest teams in Europe have made enquiries about him. There’s a big market for him, both in Italy and abroad.

“There are so many possibilities, Inter is one of them.

“Could he leave in January? We can’t say yet. Biglia is happy at Lazio, but we must think about what’s best for his career.”