Reports are out claiming that Southampton fullback Luke Shaw already has a foot inside the Manchester United camp. 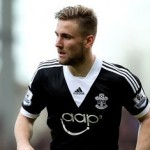 The England international star has started house-hunting in Cheshire as he draws closer to signing for United.

Shaw’s family initially had reservations about the 18-year-old moving north but now they are actively looking for a new house in Cheshire, according to The Mirror.

A source revealed: “Luke is still only 18 and his family want everything to be right for him.

“Where he lives and how he adjusts to a new city is a big thing for them – but now they are convinced about the move.”