Reports are out claiming that Barcelona president Josep Maria Bartomeu says new contract talks with Neymar will be held in the coming months. 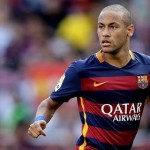 The Brazilian international superstar has confirmed contact with Manchester United, but Bartomeu is confident securing the Brazilian to an improved deal.

“This is the season of his renewal, yes,” said Bartomeu on 8TV.

“But from here, we will try not to broadcast the details of the negotiations and work discreetly to be able to renew his contract.”