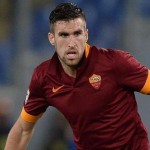 Reports are out claiming that AS Roma are willing to offer Kevin Strootman the club captaincy.

The London Evening Standard reported that the Dutch international is to be offered the captaincy of Roma if he signs a new five-year contract in Italy.

Strootman is currently recovering from his second major knee injury in two years. Had he remained fit, there is a good chance he would now be at Manchester United.

Despite these problems, reports in Italy indicate that Roma retain huge faith in the Dutch midfielder and are ready to build their future around him.

Strootman, 25, earns about £79,000 a week in the Italian capital and if he signs, he can expect to move closer to the club’s top earner, Italy midfielder Daniele de Rossi, who collects a weekly wage of £182,000 – which makes him the top earner in Italian football.