It has been revealed that Feyenoord starlet Tahith Chong has expressed his desire to remain with the Dutch outfit, despite interest from Premier League giants Manchester United. 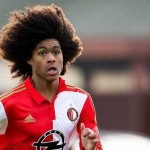 The 16-year-old midfielder has been heavily linked with a move to Old Trafford, but it is understood Feyenoord have taken measures to ensure Chong is aware first team football awaits him in the Eredivisie.

“Feyenoord is and remains my first choice and we are still negotiating,” Chong told Fr12.nl.

“It’s true that Manchester United are interested in me, but I want to just stay at Feyenoord. There is absolutely no question that I’m going out of the club.

“Feyenoord now has come up with a plan of how they see me in the coming years at the club. I am hopeful that it will be all right and that I’m going to sign a contract with Feyenoord.”