Goal.com reports that Man Utd are keeping a close eye on Thiago Alcantara’s situation at Barcelona and David Moyes is very interested in bringing the talented player to Old Trafford.

The £15m-rated midfielder is also on the radar of Manchester City this summer, with the 22-year-old keen to leave Camp Nou in the pursuit of greater first-team opportunities. 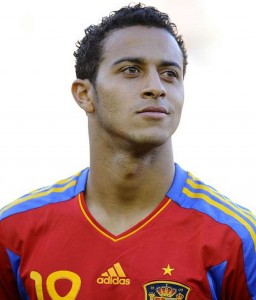 The former Everton boss, who arrived at Carrington on Monday to meet with club staff after replacing Sir Alex Ferguson at Old Trafford, is set to maintain United’s long-standing interest in the 22-year-old.

Sir Alex made informal enquiries regarding the youngster’s availability two years ago but was rebuffed by Barcelona, who rewarded Thiago with a four-year contract in 2011.

Thiago has been deployed as both a creative and deep–lying pivot midfielder at Camp Nou since making his debut in 2009, but has seen his first-team opportunities restricted following the arrivals of Cesc Fabregas and Alex Song from Arsenal.

The midfielder has a release clause of €90 million (£77m) in his current contract with the Spanish champions – though reports in Spain have suggested this may have been dropped to as low as €17m (£14.5m) in recent weeks.

As such, Old Trafford officials are confident a bid of around £15m could be enough to tempt Barcelona into selling their man.

United also feel that his wage demands would fit comfortably within the club’s current salary structure.