It has been reported that Manchester United are offering massive money to convince Toni Kroos to leave Bayern Munich. 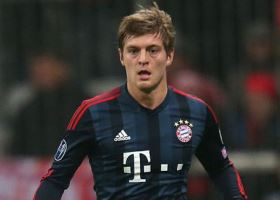 The Guardian reported that the Premier League giants are offering Kroos £260,000 a week to quit Bayern in the summer.

The deal would put him in the top bracket of earners at the club, alongside Rooney and Robin van Persie.

It is said that the German international is now seriously considering the offer, despite United’s lack of Champions League football next season.