Reports are out claiming that Manchester United have made a fresh attempt for Sporting Lisbon midfielder William Carvalho. 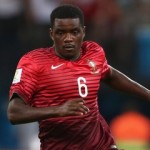 The Daily Mail claims that Portuguese reports state United have sent a delegation to negotiate a fee with Sporting for Carvalho.

The 22-year-old has been an on-off target for United over recent months with concerns that he is over-priced at £37.5million – his buy-out clause.

Arsenal, Monaco and Chelsea have also shown an interest with the affluent French league side in particular tipped to land the Portugal international having already offered £27million.

United have a good relationship with Sporting having signed Nani and Cristiano Ronaldo in the past.

They need a defensive midfielder and have been offered a deal for Nigel de Jong at AC Milan with the Italians keen to raise money.