Reports have emerged claiming that Manchester United are closing on a deal for Ajax prospect Timothy Fosu Mensah. 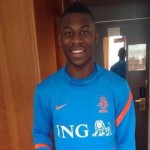 The Daily Mail reported that the 16-year-old defender was at United’s Carrington training ground yesterday ahead of a move which will cost an initial £300,000 in compensation.

It is said that United scouts were impressed by Fosu Mensah during Ajax’s AEGON Future Cup tournament win in April.

Manchester City and Inter Milan have also expressed an interest but Fosu Mensah, who can play in a range of defensive positions, has opted for United.