Reports are out claiming that Manchester United have made a late move for Benfica midfielder Enzo Perez. 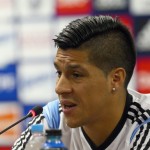 The Daily Star reported that the Premier League giants have lodged a late bid to snatch Benfica’s Perez away from the grasp of Valencia.

It was thought the Spanish side were in pole position to sign the Argentine, but reports in Portugal claim United have come in with a late bid.

United took a good look at Perez when David Moyes was the boss at Old Trafford, but balked at the asking price of £23.75m – Perez’s buy-out clause.

United now appear to be undeterred and have decided to offer the asking price as they continue to splash the cash this summer.

Reports in Spain suggested Valencia had agreed to pay the £23.7m following their impending takeover, but delays in finalising that deal have allowed United to slip in and try their luck.