It has been reported that Manchester United boss Louis van Gaal may bring forward plans to sign AS Roma midfielder Kevin Strootman. 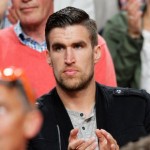 The Daily Express says it has been suggested that the Dutch international remains Van Gaal’s top midfield target and that the Dutch manager could step up his interest before the end of the transfer window.

Roma have always insisted that Strootman is not for sale and Rudi Garcia said earlier this summer it would take a bid of at least £80m to get them to change their mind.

Strootman is still recovering from a knee injury that ruled him out of the World Cup and it was thought that United would hold off until January before making a move to see how the 24-year-old recovered.

But fresh reports in Italy suggest that United could hold talks with Strootman about a move this summer and oversee his rehabilitation in England instead.