Reports are out claiming that Manchester United will wait until the end of the season to sign Borussia Dortmund defender Mats Hummels. 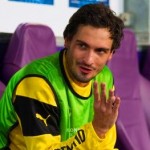 The Daily Star reported that United executive vice chairman Ed Woodward today revealed the club’s latest financial figures and indicated that their long-term focus is on next summer’s transfer window, instead of this January.

According to recent reports, Bundesliga club Dortmund are likely to demand in the region of £47m for Hummels.

They are likely to face competition from Arsenal, who are also interested in the Germany international.

Woodward said: “Nothing has changed since what I communicated at the last conference call.

“We are not looking to enter the market for short-term fixes.

“However we have targets that we are looking at for next summer. Should any of them become available in January – which obviously is rare – we will consider acting. But in terms of expectations-setting we all need to recognise that is a low probability.”