Reports are out claiming that Manchester United target Kevin Strootman has suffered a fresh injury scare at AS Roma. 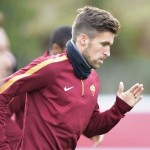 For their 1-1 draw at Fiorentina, the 24-year-old suffered damage to the same knee during the first half and was quickly substituted.

Strootman was due to have tests yesterday and while Roma are cautiously optimistic, it appears highly unlikely that United would make a late bid for the player during this transfer window. Mattia Destro Excited To Be Linked With Arsenal